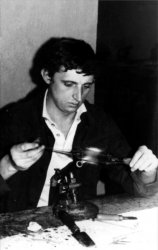 The founder and owner of the Company is Mr Lechosław Frankowski. As a young journeyman in the 60's he learnt glass moulding profession in the craft workshop lead by Edward Głąb at ul. Piotrkowska in Łódź. The company used to manufacture the first neon signs and other glassware products in the city, until its Master Głąb had passed away and the firm folded. For a few years Lechosław Frankowski has worked in LABMED cooperative and state owned WUTECH, manufacturing neon signs. Meanwhile he has completed the only school teaching glassworkers in Poland - Technikum Szklarskie in Wołomin.

The beginning of the Company dates back to September 1981, when in an adapted garage at ul. Ołowiana in Łódź it manufactured glass products such as cigarette holders, alcoholmeters, aquarium accessories etc. The martial law period and subsequent years, when there was a lack of everything, was fostering a development of sales. The sales base used to be limited to a dozen or so shops around Łódź.

For several years the Company has been evolving, new employees joined. The enterprise becomes truly a family business - along Lechosław his sons Adam i Łukasz begin their work. Over a quarter-century of its existence the Company has trained many apprentices, who obtained qualifications of glass moulders, thanks to the master certificate held by Lechosław Frankowski. At the end of ‘80s the Company moves to its own premises in Antoniew n/Łódź, where it operates to this day. The company begins to become fully self-sufficient. Its recognisable name appears - KAPILAR and its trademark logo. The company has its technical backing, sporting all necessary facilities i.e. burners room, plastics mould injector, silkscreen printing equipment etc. Due to elimination of intermediaries in the production KAPILAR begins to deliver goods characterised by low cost and easily proven quality.

Own backing and favourable economy foster continuous growth of the Company. Its offer gradually expands to more product groups: thermometers , DIY winemaking , household glassware and laboratory glassware. The last to be introduced at end of the ‘90s are neon signs, which promptly become Company's second largest domain. Dominant customers become wholesalers and those of advertising companies, which don't have their own production facilities for neon pipes.

In 2003 the enterprise expands production and office spaces. Also new employees arrive, mainly in office and administration. The final organisational structure forms. Expansion of employment and production and market pressure dictate introduction of the quality management system PN-EN ISO 9001:2001, which the Company obtains in the year 2005. Two years later the Company receives another certificate of SOLIDNI W BIZNESIE program.

At present KAPILAR employs about 20 permanent staff. The infrastructure is being continuously developed and market position strengthens on both domestic and European markets. Participation in trade fairs, press publications , scientific papers and awards and patents increase brand identity and recognition of Company's products. What's next? Nobody knows, but everything is possible in Kapilar, as WITH GLASS YOU CAN DO EVERYTHING!

With this thermometer you will know temperatures all over the world! Check the weather